If a photo isn’t perfect, you can fix it in iPhoto. For example, you can crop a photo to remove unwanted parts, change a color’s tint, or remove a blemish. You can also use iPhoto to add interesting effects, such as sepia tints. You can always revert to the original photo, so don’t be afraid to experiment.

To edit a photo, you need to open it in edit view, so that the editing tools appear: 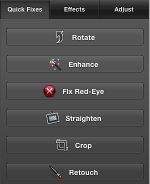 To open a photo in edit view:

To zoom in or out when editing a photo:

After opening a photo in edit view, do any of the following:

When you edit a photo, any changes you make are applied to the photo everywhere it appears (for example, if you added it to a project such as a card). To edit only one version of a photo and leave other versions unchanged, duplicate the photo before you edit it, and make changes to the duplicate. (There are some changes you can make to photos when you print them, and some you can make to photos placed in projects such as books, cards, and calendars, without affecting the photos in your library.)

Tip:  To quickly compare before and after versions of a photo while you’re editing it, press the Shift key.

iPhoto editing is nondestructive, which means that you can always return your photo to its original unedited state.

If you take photos with an iPad, iPhone, or iPod touch that has iOS 5, and then edit the photos using the Photos app, the edits are preserved when you import the photos into iPhoto. You can undo the edits in iPhoto if you choose.